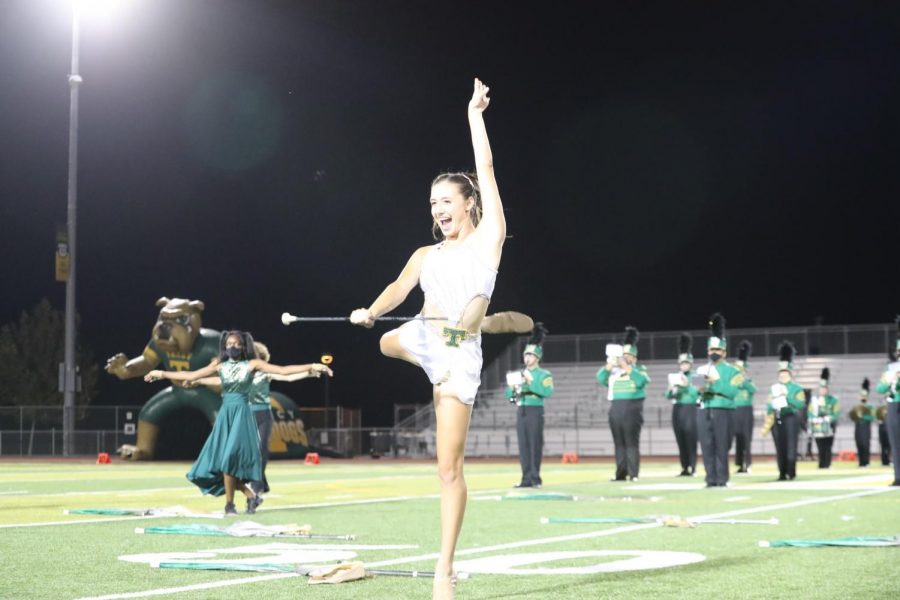 Julia Sawin at the Tracy vs. Lagona Creek Football Game On September 24th.

Julia Sawin is a 16-year-old junior attending Tracy High, that has a deep passion for the sport of baton twirling. Sawin twirls for Tracy High and twirls nationally as well. At the super young age of four, Sawin was already twirling. As time passed, she grew into an incredible athlete due to her mindset, dedication, determination, and most importantly, the amount of time she puts into practicing the art of twirling.

She takes ‘practice makes perfect’ to another level as she invests hours and hours into her craft. Sawin’s dedication and hard work, starting off young, has led to her becoming one of the best twirlers around. Her family and friends are very supportive of her being a twirler and have always been proud to see how far she has come from where she started.

“It’s cool having a friend that has such a rare talent,” her best friend Alexis Vieira said. “She continues to work hard every day to soon try out for the world team, and it’s so exciting that I am able to cheer her on and watch her achieve her goals,” Vieira said.

Her work ethic is seen and admired by everyone around her as she finds ways to balance school and sport. Sawin grew up twirling with one of the greatest inspirations in her mom who was also a twirler. Her mother was one of the reasons for her getting into twirling and she wanted to follow in her mother’s footsteps.

“My mom was a twirler and she twirled in college and competitively and I guess you could say I was following in her footsteps,” said Sawin.

Mrs. Sawin stated, “Julia loves winning trophies to the point where it becomes a joke in the family, anytime she does anything else and finds out a trophy might be involved Julia wants it, so I think my reaction was let’s do this!” She said, “It was my job to give her all the resources to help her be successful, it has led to her getting to compete in Canada and France.”

Being competitive has always been a normality as Sawin competes and performs in various events. France, Canada, Florida, and Washington D.C are a few of the many places she has been to compete with the best of the best. She has won many national and international titles, that include a gold medal that she won in Canada, and the bronze medal she won in France. This is especially impressive as she faced the best of the best to win these awards.

“This summer at Nationals in Florida Julia made it into the finals after winning her age division getting to compete against the athletes that are the best of the best in twirling, to see her on that floor with them was just incredible.” Said Julia’s mom about what its like to see her daughter compete at the level she’s at.

Sawin stated that competing with the best of the best was one of her best experiences and she’s taken a lot away from the experience.

“I’ll get really nervous as I wait to go out there, but once I’m out there it all disappears,” she said about what it likes to perform in front of an audience.

Her skill and dedication to twirling has been inspirational to her younger sister that also twirls at Tracy High.

“It is amazing being able to see how great my sister is and getting the chance to learn and watch her as she grows and advances in this sport, it makes me feel very lucky because I get to almost follow in her footsteps and learn how to be an elite twirler that she is,” stated her younger sister Emma Sawin.

She has been one of Emma Sawin’s great sources of advice and help with anything in general. From baton to important advice about how to keep cool in stressful situations like performing in front of a crowd. Whenever Emma Sawin gets overwhelmed, Julia is always by her side to guide her and put her head back in the game. When Emma struggles with a trick to do with baton, Julia is quick to help her, and Emma will then get the hang of the trick down shortly after.

Sawin started off young as a twirler and progressed to become one of the top talents. Competing with the best of the best and still coming out of the competition with a medal. This is still not considering that Julia has a long way from now to improve her skills and become greater with time. With her work ethic, anything is possible for Julia and the future will be as bright as ever. The future is promising, and the young twirler still has far to go and more medals to earn.