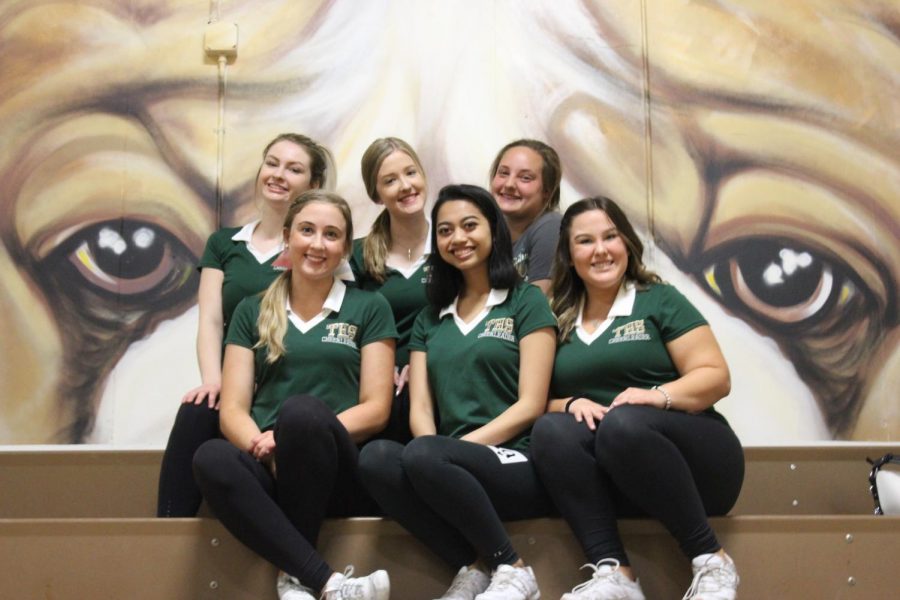 Chase Burns, Reporter
Every April girls around Tracy, CA start to prepare for the upcoming school year’s Cheer Team tryouts. For the 2019-20 high cheer season, tryouts took place from Aril 8-10 consisting of about 50 athletes all competing for a spot on either JV or Varsity. Tryouts for all athletes took place in the main gym here at Tracy High School form five o’clock to eight o’clock. Over the three day tryout period the incoming and returning athletes were taught and reminded about technique as well as given new things to try and interpret through the process. Each day of tryouts new skills were incorporated to become the final result of the main tryout on day 3.
Starting on day one, basics, technique, dance 1, and two cheers are taught to all athletes. Mainly focusing on teaching motions along with great technique taught by the Tracy High 2019 seniors from the previous season based off what they have learned over the years. After learning the small things about cheer, the hard work starts to come. Dance 1, created by Taryn Sanchez was shown, then taught to the athletes and will be needed to know for the final tryout day.
On day 2, many athletes come in sore and tired but still ready to work. The tryouts started off with a nice short run to warm up and then instantly got back to work so the coaches can see who can keep up as well as who put in extra time and hard work at home. Around this time the coaches have an idea of who they feel is the best fit for the upcoming season. Still not 100 percent sure the coaches continue on with another day of tryouts consisting if another dance as well as reviewing all cheers taught previously on day 1. Next, each non-returner is asked to show their stunting abilities as well as any tumbling they may have.
Finally, day 3 comes around and the long, hard, exhausting tryout process is almost over. On this day the girls trying out to be on the JV team were asked to arrive at 5 pm and varsity members were asked to show up at 6 pm. The reason for the different times is because the coaches take in three incoming athletes at a time and have them try out together in the main gym. First, all incoming freshmen and sophomores are taken in three at a time then all juniors and seniors in a randomly picked order. Once walking in on the final day of tryouts, first, a headshot is taken of each athlete for the coaches to refer back on when coming down to connecting notes to faces, then each athlete is asked to showcase their best jump as well as a toe-touch. After that, one athlete is asked to call a cheer and another is asked to call a chant, both athletes are again randomly chosen by the coaches. Lastly, the final part of the tryout is performing one of the two dances taught through the process. When the dance is done, the last and final step is to smile and cheer on the “crowd” just as if you were at a game.
Once tryouts were complete, the coaches had a long night ahead of them, Both JV and varsity teams will be chosen by that Thursday morning before school begins. Once the list was posted Thursday morning, many athletes come and go checking on the list to see who made it and who didn’t. Some walking away sad some walking away excited for their coming season. No matter, what all athletes know they put their best effort into their tryout and will more than likely be returning the next season to redeem a spot on the team. Until next years tryouts, Tracy High School cheer team will be working long and hard nights preparing for the season and everyone who did not make the team will also be putting in long hours of dedication at local gyms or at home to prepare themselves for their next tryout.
What are the positives of being on the cheer team?
“The friendships created are like no other, being under the Friday night stadium lights with your sisters by your side is one of the best feelings,” said Gianna Barrios a three-year member of the team
Some tips and tricks for next school years tryouts:
“Be extremely happy, if you feel awkward you’re doing something right,” said Amanda Framer, a three-year member of the Tracy High cheer team
“Always stay positive no matter the outcome, stay enthusiastic and push through the process,” said Barrios
“Have fun, smile, and do good,” said Gessica Oliveri, a returning athlete onto the cheer team

The 2019-20 Tracy High cheer team will start practicing for their season very soon and can not wait to bring fresh skills to the field. As for next years tryouts, you can expect them to be around the same time in April of 2020.